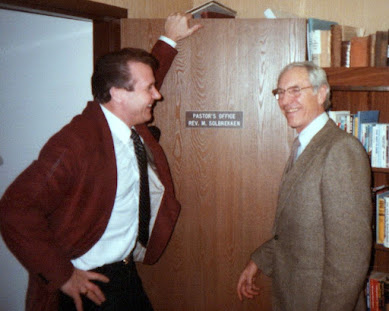 Word was spreading like wild fire!  Rev. Max Solbrekken was to be interviewed on Radio CHED Impossible, you say. Maybe impossible in 1984 - but the year was not 1984...it was 1965!  CHED was a baby, just breaking into the Edmonton market.

Don Rollans was CHED’s hatchet man, an imitation of Pat Burns, without a mean streak. His talk show was called “The Open Line”. Yours truly was a young Evangelist, like CHED - just starting out. Max Solbrekken responded to the invitation; two microphones, a little studio and Don Rollans, a friendly young commentator with a reputation.

“Welcome to CHED’s ‘Open Line’ Max.  Shall I call you Reverend?”  “That’s fine.  I just got ordained two years ago!” “What are you doing in Edmonton, again?  What’s a revival crusade?  What do you think of fortune tellers and mediums?”

“They’re on the opposite side of the fence!” “You mean, they are evil?”  “Yes, sir.  That’s exactly what I mean!” “Who else says so?”  “St. Paul, Jesus Christ and Moses!”  “Does the Bible say anything about spiritist mediums and the occult?  “Yes! “Where in the Bible is that recorded? “Deuteronomy 18, Isaiah 47 and Exodus 22.”

WHAT REALLY DID HAPPEN?

“Okay, tell me about the Gospel and your conversion.  Why did you enter the ministry?  “Don, I was going my own way, doing my own thing until one day...” “Yes.  Go on, what happened?”  “I met Christ.”  “You met Christ.  What do you mean?  What really did happen?” “I got saved.”  “How?” “My heart was cleansed by the precious blood of Jesus.”

“Just a minute Don, you’re trying to act like Jack Webster.” “What’s wrong with Jack Webster?” “He’s an intellectual bully.  Asks 5 questions and expects an answer to every one of them in 30 seconds.

Let me tell you Don, Jesus is real and His power is evident in my life.  He’s changed me and He can change you.” “Yeah?  You mean there’s really something to the Bible?  And Evangelists are for real?”

“That’s true Don.  Christ died for your sins on Calvary’s cross.  He arose from the dead and is alive today.  He is the answer to the problems of this world.”

WOW!  AND THEN HE WAS GONE!

At that moment I looked out the little window.  A gray haired man was walking furiously back and forth puffing on his pipe like the world was coming to an end.  He kept glancing at us and muttering sounds.  I wondered if he had ants in his pants.

As soon as we broke for the commercial, he poked his nose in the door, mad as a hatter.  “What the Hell is going on around here?  Is this some kind of a revival meeting?  I told you to get this guy!”

Wow! He slammed the door and then he was gone! We were back on the air again and Don was like a tiger once more.  It wasn’t long however before his genuine goodness and decency came through and I was sharing the blessings of God again. When our time was almost up, Don Rollans turned to me and said,

“Max, you’ve handled this interview so well.  I can’t understand how you did it! You know, I really did try to give you a bad time.  What’s your secret?”  I leaned into the microphone and said in a hushed voice, “Don, I really think it had something to do with the precious blood of Jesus!

I CLAIM THE BLOOD!

Posted by Max Solbrekken at 4:28 PM