Recently we had the privilege of meeting some wonderful friends who attended our services in Faith Cathedral in the 1980s.
April Guernett is now 48 years old. She was 8 years of age when Jesus healed her miraculously in 1981. Here is the testimony she sent us a few weeks ago. All glory and praise be unto our Saviour who is still performing miracles today!
In His wonderful Name!
Max & Donna Solbrekken 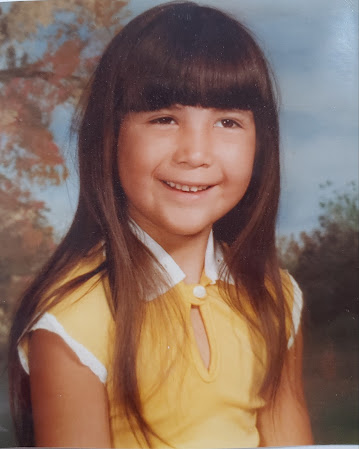 April Guernett at age 8
Healed of an Ulcer

By the time I was 8 years old and I had been suffering with stomach pains for as long as I could remember, and it had gotten to the point that I would feel sick almost every time I ate. My mom had to be very careful about what I ate and had to peel any fruit with skins on it, I wasn’t allowed anything with seeds in it, and I certainly wasn’t allowed any of the greasy foods that kids love like French fries. I wasn’t allowed to have pop either because that would really set my stomach off. Many, many times after I ate, I would be in so much stomach pain that I would be hunched over or in a fetal position on the floor and my mom said my face would always go so pale. Vomiting was a common occurrence. This had gone on for a long time and because of my age no doctors were taking it very seriously, even going as far to say it was just in my head or that I would grow out of it. My mom kept trying to find answers and was finally able to get me in to a specialist who found out that I had an ulcer and by this time it was a bleeding ulcer, and I needed to have surgery.

My parents had just started seeking the Lord in their lives and were sort of on the fence about Christianity at that time, but my mom heard about a healing service at a church in Edmonton called Faith Cathedral and really wanted to take me. She convinced my dad to take us as we lived in Tofield at the time. After the sermon, when Pastor Max Solbrekken called people up that needed healing, my mom held my hand and took me to the front of the church. I remember there were quite a few other people standing up there that needed prayer, and Pastor Max was going around with a small group of people (maybe Elders?) and praying with people and some of the people he prayed for were falling down. I remember that after Pastor Max spoke to my mom, oil was put on my forehead, and he put his hands on me and prayed healing over me as others gathered around. I remember a warm feeling, sort of like electricity (but it didn’t hurt), suddenly go from the top of my head to the bottom of my feet and I felt myself falling down. Someone caught me and let me down gently and I just laid there, hearing the prayers continue as Pastor Max continued to make his way to others, hearing other people worshipping, and I just laid there feeling peaceful. My mom said she was thinking, “What do I do now?”

After a little while, I got up and my mom took me back to where we were sitting and both of my parents kept staring at me and asking me how I felt. I could still feel the warmth in me, and it felt sort of like a buzzing in my body and I told them that. We left and were talking about what happened as we drove home. They kept asking me how I felt, and I felt good. We stopped at a gas station and my mom said I could have a little bit of pop. I never got to drink pop, so I was super happy about it. My mom later said she wanted to see how I would handle it. I drank a little bit and felt fine, so I was allowed to have a bit more, and still didn’t feel sick! My parents say they were contemplating on the ride home what all had just happened and if it could be that I was really healed.

The time came that I went for my pre-op appointment where they did more tests for my upcoming surgery. The doctor came out and told my mom that there was no ulcer there anymore and there was not even a scar where the ulcer had been. I was completely healed!!! Praise God!!! He is so good!!!

My dad said he was very touched by my healing, and both of my parents became Christians, and I did as well. To this day I have unshakable faith that God is real, and miracles are still happening on this earth in Jesus’ name, even today. Hebrews 13:8 says, “Jesus Christ is the same yesterday, today, and forever.” He still does miracles! I thank Pastor Max for his love for serving people and for praying for me, and I thank Jesus with all my heart for healing me and bringing my family to Him!

With love and gratitude,

Posted by Max Solbrekken at 8:44 PM