CORRUPT  BIDEN SNUBS ALMIGHTY  GOD AND JESUS CHRIST IN NATIONAL PRAYER! HE MIGHT HAVE OFFENDED THE GOD OF KAMALA HARRIS OR AOC! 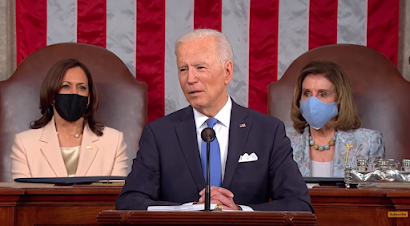 Yesterday marked the 2021 National Day of Prayer, a day on which Americans across the country pray in unity for the nation.

Each year since the Day of Prayer was instituted in 1952, the president has issued a proclamation calling on Americans to participate in the solemn task of prayer on the first Thursday in May. This year, however, President Joe Biden failed to mention exactly to whom Americans would pray by leaving out any mention whatsoever of the word “God.”

“Throughout our history, Americans of many religions and belief systems have turned to prayer for strength, hope and guidance,” Biden’s proclamation reads. “Prayer has nourished countless souls and powered moral movements – including essential fights against racial injustice, child labor and infringement on the rights of disabled Americans. Prayer is also a daily practice for many, whether it is to ask for help or strength, or to give thanks over blessings bestowed.”

In 2011, former President Barack Obama, under whom Biden served as vice president for two terms, referred to “God” twice in his Day of Prayer proclamation.

“Let us pray for the police officers, firefighters and other first responders who put themselves in harm’s way every day to protect their fellow citizens,” the proclamation read. “And let us ask God for the sustenance and guidance for all of us to meet the great challenges we face as a Nation… I invite all citizens of our Nation, as their own faith or conscience directs them, to join me in giving thanks for the many blessings we enjoy, and I ask all people of faith to join me in asking God for guidance, mercy and protection for our Nation.”

In his final National Day of Prayer proclamation in 2020, President Trump didn’t simply refer to any vague theistic notion of “God,” but specifically cited the Bible.

“As one Nation under God, we share a legacy of faith that sustains and inspires us and a heritage of religious liberty,” Trump declared last year. “Today, we join together and lift up our hearts, remembering the words of 1 John 5:14 that tell us when ‘we ask anything according to His will, He hears us.'”