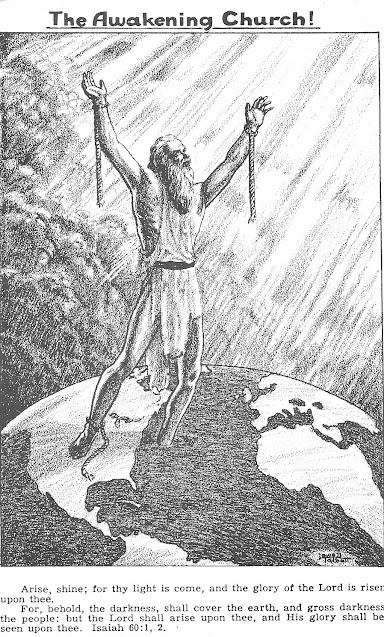 "Therefore let us not sleep, as others do; but let us watch and be sober. For they that sleep sleep in the night; and they that be drunken are drunken in the night. But let us who are of the day, be sober, putting on the breastplate of Faith and Love; and for an helmet, the Hope of Salvation.

“For God hath not appointed us to wrath, but to obtain salvation by our Lord Jesus Christ, Who died for us, that, whether we wake or sleep, we should live together with Him." (1 Thes. 5: 6 -10).

A number of years ago, Dr. Billy Graham stated: "The world wants it straight but the church wants it in circles!" How sad!  Jesus said: "...If ye continue in My Word, then are ye My disciples indeed. And ye shall know the TRUTH and the truth shall make you free" (John 8: 31 -32)

St. Paul admonished: "Preach the Word; be instant in season, out of season; reprove, rebuke, exhort with all long suffering and doctrine. For the time will come when they will not endure sound doctrine; but after their own lusts shall they heap to themselves teachers, having itching ears. And they shall turn away their ears from the truth..." (2 Timothy 4: 2- 4)

We are now living in the closing days of time! God's great time clock is about to strike ' Midnight '.The handwriting is on the wall: Time is short and Judgment is prophesied to come to a Christ - rejecting world! Soon, the day of mercy will be over and Jesus will return for His Church!

An angel will  then step out on space and come down with a powerful message to a sin-filled world. Placing one foot upon the sea and the other on dry land, he will raise his hand to heaven and swear by Him Who lives forever, that Time shall be no more.” (Revelation 10: 5-6)

THE CHURCH IS ASLEEP TODAY!

I believe that the Church is asleep today across the world, and has failed to take the commands of Jesus Christ seriously! Jesus knew this would happen, so He asked the question: "..Nevertheless, when the Son of Man cometh, will He find faith on the earth? " (Luke 18: 8). A lukewarm, backsliding Church has taken the leadership of Christ's Body out of the hands of the blessed Holy Spirit and placed it into human hands!  And the results are disastrous!

In this message, I share Scriptures that give us an accurate picture of the Church today. At every critical junction, the Church was asleep!

1. JONAH - A PICTURE OF A DISOBEDIENT, REBELLIOUS CHURCH!

“But the Lord sent out a great wind into the sea, and there was a mighty tempest in the sea, so that the ship was like to be broken. Then the mariners were afraid, and cried every man unto his god, and cast forth the wares that were in the ship into the sea, to lighten it of them. But Jonah was gone into the sides of the ship; and he lay, and was fast asleep. So the shipmaster came to him, and said unto him, What meanest thou, O sleeper? Arise, call upon thy God, if so be that God will think upon us, that we perish not.” (Jonah 1:1-6)

Here we find a picture of a rebellious and disobedient church! Jonah was a special messenger that God wanted to use. He was commanded to go to Nineveh with a warning of coming judgment. He refused and deliberately took a ship to Tarshish, running away from God's call on his life and the direct command of the Almighty!

We see the same thing happening today. Many put their own agenda ahead of god's agenda. they serve themselves or others before serving God! God has become only a convenience or an errand boy, instead of the Commander-in-Chief and Master of our lives! God's call is put on the back burner of our schedule, a second fiddle, a spare wheel, instead of the  center of our lives!

In his rebellion, Jonah "rose up to flee unto Tarshish from the presence of the Lord, and went down to Joppa..." He used the missionary money to do 'his own thing'! In his complacency he went "down into the sides of the ship; and he lay, and was fast asleep!" A picture of today's rebellious Church! Refusing to preach the Gospel. Refusing to fast and pray and seek God for Revival. refusing pay our tithes and win souls May God help us!

2. SAMSON - A PICTURE OF A WORLDLY CHURCH!

In Judges 16: 19 -16 - 21) we see a picture of the worldly Church asleep upon the lap of the world! Samson was an anointed, gifted, and spirit empowered Nazarite - a picture of a bold, victorious and powerful Church tearing down the strong holds of the enemy! Winning victory after victory until the enemy  found a chink in his Armour, a weakness that he could exploit.

And then, the disastrous fall ! God's champion, stripped of his power, devoid of his eyes, a pitiful hulk of humanity, denigrated, defeated, had become a laughing stock in the eyes of his enemies! Like an oxen, grinding in the mill. Oh, God help us. Oh, God help your Church.

It didn't happen overnight. There were warning  shots fired across the 'bow of his boat'! He had plenty time to change course, but he didn't!  Samson played the fool and lost! He lost his anointing, his power, his position of authority and leadership and his life!

Samson was a gift from God to his parents and to Israel . His parents had made a vow to God. He was consecrated to God. He knew the rules, but he broke them and finally told Delilah - who was paid by the Philistines to find out wherein lay his great strength - the secret of God!

I'm afraid the Church today is becoming worldly and losing her great testimony and strength! The Church is asleep today!

3. DISCIPLES ASLEEP - A PICTURE OF A PRAYER LESS CHURCH!

In Matthew 26: 36 - 44, we see a picture of a prayer less Church! In His hour of greatest need, His inner circle disciples let Him down! Jesus' heart was heavy, knowing that He had to face betrayal, denial, scourging, mocking and the Cross. He knew that the sins of the entire world would be laid upon Him. He would carry our sin, shame, pain, sickness and judgment, so we could be free!

As these tremendous burdens fell upon Him so that He "sweat as it were great drops of blood", He was depending upon support from His disciples, especially His inner circle of Peter, James and John, but they also fell asleep! Three times He called upon Them to pray with Him as His hour was approaching, but no, they could couldn't keep their eyes open!

He asked: "What, can't you even watch with Me for one hour?" Not even a single hour, in His most pressing hour, as He battled the flesh and the devil.

I wonder how Jesus feels today, when He sees the prayerlessness of Christian people and the coldness of our churches? In a  survey in the USA , it was found that on average Christians prayed  three minutes each day and on average, preachers prayed nine minutes a day!

Martin Luther - the great reformer - prayed an average of three hours every day. He said that if he missed praying at least two hours a day, the devil would get the advantage over him! Is it any wonder that he could stand alone against the evils of the Roman Pope, the Cardinals, Nobles and the Emperor, and bring revival to Europe?

4. EUTYCHUS - A PICTURE OF THE CHURCH  FALLING ASLEEP IN THE REVIVAL!

In Acts 20: 7 - 10, we find a picture of the some in the churches falling asleep in the middle of the revival. Young people going to Bible College and backsliding there. Hundreds of young men and women have gone to liberal seminaries with a desire to serve GOD and have lost their faith in the Bible and Jesus Christ  as the Divine Son of God, through unsaved professors.

It also happens in Evangelical Bible Colleges and Churches. Ministers have fallen into sin in the heat of a revival! Be careful, after every great victory the TEMPTER will very slyly seek inroads, when your guard is down! After God had given Eve to Adam, the devil appeared. After Noah had over lived the flood, he got drunk and Canaan  was cursed through his father Ham's actions. After Lotescaped the judgment of God upon Sodom , he got drunk and committed incest with his daughters. After Samson and David had scored victory after victory, they both fell into sexual sins with terrible consequences.

And after Jesus had fasted 40 days, Satan came to tempt Him. Jesus rebuffed the devil and he had to flee, but he  tried unsuccessfully to seduce our Saviour.

5.  FIVE FOOLISH VIRGINS A PICTURE OF THE UNPREPARED CHURCH

Commenting on the parable of Jesus about the 'Sower and the Seed', D.L. Moody stated that there are three groups of Christians! The seed that fell on good ground produced fruit, some thirty, some sixty and some 100 per cent.

The great  Evangelist felt that the thirty per cent represents those who have gotten saved and stopped growing. The sixty per cent were those who became strong in God and were separated from the world. The last group, he stated, was the best; those who had sought God and received the Baptism of the Holy Spirit according to John 7: 37 - 38.

Jesus said that the Kingdom of Heaven- not the kingdom of the world - shall be likened unto ten virgins - not young women or prostitutes, but VIRGINS!  This is a picture of  believers who have started on the journey to meet Jesus, but five were wise while five were foolish! This is a picture of the Church, with only 50 per cent ready to meet Jesus when the trumpet sounds!

It behooves us to repent of every sin, pray until we are sanctified and set apart for Jesus - from the world, flesh and the devil - and baptized in the Holy Spirit and fire! The Bible says that Jesus is coming for a "glorious Church without spot or wrinkle." (Eph. 5: 27)

In closing, allow me to quote three powerful Scriptures:

"And that, knowing the time, that now it is high time to awake out of sleep: for now is our salvation nearer than when we believed. The night is far spent, the day is at hand: let us therefore cast off the works of darkness, and let us put on the Armour of light. Let us walk honestly, as in the day; not in rioting and drunkenness, not in chambering and wantonness, not in strife and envying." (Romans 13: 11 - 13);

"For we must all appear before the judgment seat of Christ; that every one may receive the things done in his body, according to that he hath done, whether it be good or bad. Knowing therefore the terror (wrath) of God, we persuade men..." (2 Corinthians 5: 10 -11); "Wherefore He saith, Awake thou that sleepest, and arise from the dead, and Christ shall give thee light. See then that ye walk circumspectly, not as fools, but as wise. Redeeming the time, because the days are evil." (Eph. 5: 14 - 16).  Amen.