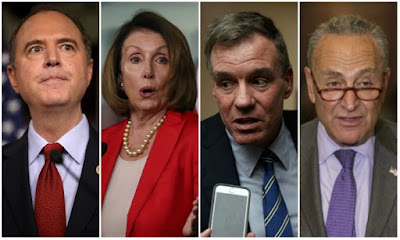 ADAM SCHIFF & NANCY POLOSI
CONTROLLED BY DEMONS?
By Pastor Max Solbrekken, D.D.
Reverend Perry Stone, best selling author believes that Satan has taken over the leadership of the Democrat Party in the USA. He stated recently that "I have never, in any nation of the world ... seen people raised up with demons in them [like] in Washington,"
You can look at their eyes when they almost start foaming at the mouth," he said. The pastor then took aim at Democratic House Intelligence Committee Adam Schiff, claiming that the representative's "eyes get as big as saucers and it looks like he is having a seizure when you bring up [Trump's] name.
Stone said. "They have demons in them. They're trying to place hexes and curses on President Trump," the religious leader said. "Satan hates this man."
It is true that Adam Schiff is a 'known liar' and Nancy Pelosi looks like the 'witch at Endor' and Maxine Watters and Whoopi Goldberg are hate-filled gutter snipes against decency! It is also true that Satan hates any leader who puts his trust in God and His righteousness.

ANOTHER TAKE ON THIS MATTER!

God wanted king Ahab removed because of his sins. Ahab had allied with Jehosthaphat  to fight against the king of Syria. A spirit stood before the Lord and said, "I will be a lying spirit in the mouths of all his prophets". And it was so!
All the prophets except Micaiah, prophesied saying, "Go up, the Lord is with thee." Micaiah stated: "I saw all Israel scattered upon the hills, as sheep that have not a shepherd..." King Ahab imprisoned him. "And Micaiah said, If thou return at all in peace, the LORD hath not spoken by me." Even though King Ahab disguised himself, an arrow shot at random struck him. King Ahab was killed at Ramoth Gilead! (2 Chronicles 18: 12-27)
I believe lying spirits have invaded the Democrat leadership saying: "impeach Trump." The American people are tired of all the hatred and it will be reflected at the Ballot Box. The swamp will be drained!

Eight years with Clinton who could have killed Bin Laden at  Kandahar, Afghanistan but refused to avoid collateral damage.  Instead the USA lost 3,000 in New York and thousands more in 18 years of needless wars. Former Community Organizer, Obama called ISIS a JV team under Al Baghdadi who tortured, raped and killed thousands of innocent Christians and others!


One of Satan's strategies is to instill HATE into people's minds for their fellowman. Hate reduces people to become the Devil's foot soldiers, and it appears that the new Democrat party and their Fake News Propaganda Department are in Lock stock with 'Old Slew foot. What a sad Commentary, indeed!
Posted by Max Solbrekken at 8:36 PM