THE GREAT COMMISSION
OF OUR LORD JESUS CHRIST
"Go ye into all the world and preach the Gospel...these SIGNS shall follow them that believe. In My Name shall they CAST OUT Devils..." (Mark 16: 15-18) 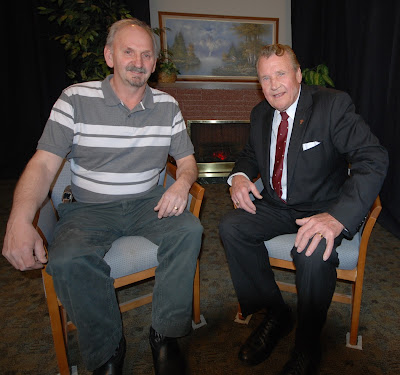 Victor Temple and Pastor Max Solbrekken in TV interview, 2013
I WAS DELIVERED FROM DEMONS
ALCOHOL, DRUGS & LIFE OF CRIME
Says Victor Temple, White Court, AB
In 1973, I was unsaved and my life was totally out of control. A friend asked me to attend an evangelistic meeting at F.G. Bursey Tabernacle, Lewisporte, NF where Brother Max Solbrekken was preaching. When the invitation to receive Christ as my Saviour was given, I accepted. Satan was about to lose a faithful servant, but not without a fight!
After a life of crime, prison, drugs and almost anything you can mention, especially hurting those closest to me, I knelt at the altar.
The heavens were like brass and it seemed as though God was so far away. It was like the time I was lost in the woods, when I was a boy. I would call for help and no one could hear me; only this time I couldn’t wait for tomorrow to bring hope!
God was calling me for the last time and I knew it. I had to reach God now. I began to panic, pulling on my hair and slamming my head into the altar. Being in Church had slipped from my mind.
Brother Solbrekken realized that something was wrong. He knew what it was, but I didn’t. He came to where I was, placed his hand on my head and commanded: “Unclean spirit, come out in Jesus’ name!”
I fell gently back on the floor. As I touched the floor I rose up again, that is, my spirit did. It was like in the cartoons when the ghost of a person would rise from the corpse. I stood there in a long white robe looking down at Brother Solbrekken and myself wrestling on the floor. It was at that point that I became aware of people around me!
I realized that they could not see me because I moved in front of them and should have blocked their view but they did not move to the left or the right to look around me, but rather seemed not to see me at all. Then my attention turned to what they were looking at.
It sounds crazy, but there we were on the floor. Then, an incredible thing happened. God let me see the supernatural!
At this point, my body turned into a transparent bubble and I saw what was inside me. It was some kind of being with a body resembling a frog. Its back legs also were like a frog but its front legs were like a man’s arms. At the end of its arms and legs there were the shape of cloven hoofs, except they looked a little more like two large curved claws.
The eyes were somewhat like the eyes of a fly, only they were tear-shaped. There were open sores all over its body and the word that came to me was “UNCLEAN.”
As it looked at me, I became frightened because of the intense hatred that was locked up in those eyes!
It then turned its intention into escaping from the preacher, clawing wildly at the concrete floor!
At that point, I remember awaking with my arms folded and embraced in Brother Max’s arms, looking up into his face.
Then, there was the most wonderful PEACEFUL feeling I had ever experienced in my life. No drugs had ever taken me this far! I was FREE! Jesus had taken the bondage and the sin – I almost felt like flying away!
The next night, God filled me with the ‘Holy Spirit and Fire’ and for the past fifteen years I have been telling what God has done for me! A week after I received Christ as my Savior in 1973, I attended a youth service in my church and I who was terrified of public speaking stood to my feet to say a few words of thanks for what God had done for me. When I finished an hour and a half later, nine people came to the altar and gave their hearts to God.

For many years, I have been involved in Prison Ministry where God has anointed me to preach and have seen many prisoners with tears running down their faces accept Him as their Savior. In recent years God has led me to the Native peoples of Canada and He has anointed this unworthy person to preach His word to them and confirmed His word with signs following.
I am so grateful to God for changing my life from hopelessness to one that is rich in blessings! Amen.
THE NIGHT VICTOR TEMPLE WAS DELIVERED FROM DEMONS, AS SEEN BY THE PREACHER!
The altars were filled with people seeking the Lord for forgiveness and salvation the night Victor Temple was drawn by the Holy Spirit to the altars at the F.G Bursey Memorial Tabernacle that night!
There was great sorrow for sin, much weeping and a lot of rejoicing, as souls were born into the Kingdom of God and filled with the Holy Spirit!
Suddenly, there was a lot of commotion at the altar as a man came off his knees, shouting and throwing people around. The pastors who had been praying at the altar had backed away from a demon-possessed man!
Someone shouted for me to come down quickly. As I approached him, I noticed his eyes were wild and he warned not come nearer or he would kill me.
I spoke directly to the demon within him, saying: “You lying demon, I bind you in Jesus’ name. Come out of this man now. Loose him and let him go!”
I moved quickly toward him and in one motion physically restrained him and flipped him onto the floor, immobilizing him!
The demons battled for only a little while and then came screaming out, as I commanded them to “Be gone” in the all - powerful name of Jesus Christ, the Son of the living God!
Then, just as suddenly as it had all started, I looked into the peaceful face of Victor Temple rejoicing and praising the Lord Jesus Christ! The next evening, he received the baptism of the Holy Spirit according to Acts 2: 4.
Victor Temple has been an example to his family, church and the world wherever he has travelled, lived and worked. His wife Gloria received Christ as her personal Saviour in one of our crusades also.
Posted by Max Solbrekken at 10:05 PM