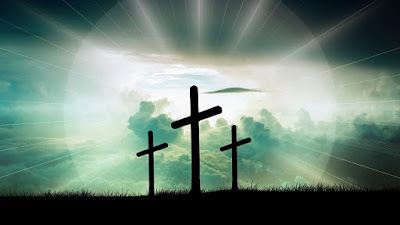 THE GREAT CONSPIRACY:
Ought not Christ to have suffered?
By Pastor Max Solbrekken, D.D.
The Bible says: “Then He said unto them, O fools and slow of heart to believe all that the prophets have spoken: Ought not Christ to have suffered these things, and to enter into His glory. And beginning at Moses, and all the prophets, He expounded unto them in all the Scriptures the things concerning Himself.

“And He said unto them, these are the words which I spake unto you, while I was yet with you, that all things might be fulfilled which were written in the law of Moses, and in the prophets, and on the Psalms, concerning Me.”  (Luke 24: 25-27; 44)
After His resurrection from the dead, Jesus answered the probing questions that were on the minds of His disciples. They were in total confusion and bewilderment when their Lord had been brutally scourged and crucified. They had believed that He was the One who bring deliverance to their people. And when they saw Him alive they were shocked and had more questions.
He quoted the Holy Scriptures from Moses, the Prophets and the Psalms. He stood in their midst, the very fulfillment of those prophecies. During His Earthly Ministry, Jesus answered questions from the scribes, Pharisees and His disciples. He said, “Have ye not read? What sayeth the Scriptures? What think ye of Christ, Whose Son is He?”
FOLLOW THE MONEY!
There are three things that almost drive atheists, agnostics and Christ rejecters around the bend. They are as follows, No. 1: Who Moved the Stone? No. 2: Where was the body of Jesus? No. 3: Why did Saul of Tarsus, the murderous Christ hater convert?
And here is one more to get everyone’s brain functioning, No. 4: How much money did the Jewish Sanhedrin pay the Roman Soldiers guarding Jesus’ Tomb to Lie?
We know they paid JUDAS thirty pieces of silver to betray the Son of God. The Scriptures record that they gave large money to the Roman soldiers who fell like dead men when they saw the angel! We also know that they promised to BRIBE the Roman Governor, if he discovered the truth.
The Holy Bible says: “And behold there was a great earthquake: for the angel of the Lord descended from Heaven, and came and rolled back the stone from the door and sat upon it. His countenance was like lightning and His raiment white as snow: and for fear of him the keepers did shake, and became as dead men.
“And when they (women) were going, behold some of the watch came into the city, and showed unto the Chief Priests all the things that were done. And when they were assembled with the elders, and had taken counsel, they gave LARGE MONEY unto the soldiers, saying, say ye, His disciples came by night, and stole Him away while we slept.
And if this come to the Governor’s ears, we will persuade him and secure you. So the took the MONEY, and did as they were taught: and this saying is commonly reported by the Jews until this day.” (Matthew 28: 2-4, 11-15)
A further question: No. 5: Why did the Jewish Leaders hate Jesus of Nazareth so deeply? Was it because He uncovered their hypocrisy, or more? Was it because Satan was in control of their thoughts, actions and deeds?
We know it was because He called Himself the Son of God! The Bible says: “The Jews answered him (Pilate), we have a law, and by our law He ought to die, because He made Himself the Son of God.” (John 19: 7).
St. Peter stated: “Him being delivered by the predetermined counsel and foreknowledge of God, ye have taken, and by wicked hands have crucified and slain: Whom God hath raised up, having loosed the pains of death: because it was not possible that He should be holden of it.” (Acts 2:23, 24)
HE CAME TO EARTH TO SAVE US!
He was BORN TO DIE as God’s Paschal Lamb, to save us from our sins!  Jesus knew why He was born and that His death would destroy Satan’s dominion over mankind.
He declared: “Now is the judgment of this world: now shall the prince of this world be cast out. And I, if I be lifted up from the earth, will draw all men unto Me. This He said, signifying what death He should die.” (John 1:31-33)
We know that Satan convinced the Jewish authorities to crucify Jesus of Nazareth: “Pilate said unto them, whom will ye that I release unto you? Barabbas or Jesus, which is called Christ? For he knew that for envy they had delivered Him.” (Matthew 27:17, 18)
Sometimes, however, we give the Devil too much credit. He wasn’t that smart when he as a created being, tried to overthrow Almighty God, and was cast out of heaven together with his rebel band. Pride makes people and fallen angels Stupid!
CAIAPHAS spoke prophetically by the Spirit of God. He said; “You know nothing at all, nor consider that it is expedient for us, that one man should die for the people that the whole nation perish not.
“And this he spoke not of himself but being the high priest that year, he prophesied that Jesus should die for that nation…Then, from that day forth they took counsel together for to put Him to death” (John 11:47-53)
The Jews know NOTHING AT ALL, when they still reject their own Messiah, the Blessed One! The Mohammedans know NOTHING AT ALL, when they DENY Jesus is the Son of God. They preach that another man was crucified in the place of JESUS, in spite of the Jewish meticulous recording of that Historic Event and the official records of His crucifixion by the Roman Authorities.

Their theology is built upon blatant lies spoken by a man who couldn’t read or write. They know NOTHING AT ALL!
THEY KNOW NOTHING AT ALL!
Atheists, evolutionists, agnostics and Christ Rejecters know NOTHING AT ALL, when they close their eyes and ears to the truth of God’s Word! The Politicians who hate the Gospel of Christ so much that they change God’s laws of marriage, promote abortion and sexual perversion to please voters during an election, know NOTHING AT ALL!
JESUS CHRIST declared: “Have ye not read, that He which made them at the beginning, made them male and female and said, For this cause shall a Man leave father and mother, and shall cleave to his Wife: and they twain shall be one flesh?” (Matthew 19:4,5)
MOSES, the Lawgiver, wrote: “And the Lord God caused a deep sleep to fall upon Adam, and he slept: and He took one of his ribs, and closed up the flesh thereof; and the rib which the Lord God had taken from Man, made He a Woman, and brought her unto the Man.
"And Adam said, This is now bone of my bone and flesh of my flesh; she shall be called Woman because she was taken out of Man. Therefore shall a man leave his father and mother, and shall cleave unto his wife; and they shall be one flesh.” (Genesis 2: 21-24)
According to the writings of Jewish Rabbis in the Babylonian Talmud from B.C. 1,000, the only time men were given in marriage to men, and women given in marriage to women was during the Days of Noah, just before God sent the Flood upon the earth. My question is, “Should be concerned how Almighty God looks upon Canada and other nations who legally are following in the same footsteps as those in the ‘Days of Noah’?
After five thousand years of recorded human history, Canada’s naïve government has unilaterally changed the definition of Man and Woman, male and female, boy and girl. In their state of HUBRIS, they must feel almost godlike, knowing more than Moses and Jesus Christ! Caiaphas was right, such Politicians know NOTHING AT ALL.
GREATEST SIN: REJECTING CHRIST!
Jordan Peterson is a Canadian clinical psychologist, cultural critic, and professor of psychology at the University of Toronto. I would suggest that all Liberal Cabinet Ministers circulate his telephone number in the House of Commons. A little talk with Professor Jordan Peterson would be helpful in their stress related work.
Liars, thieves, drunkards, murderers, drug addicts and sexual perverts know NOTHING AT ALL. One day, when all Christ rejecters stand before God the Son for judgment, they will be condemned for the greatest sin of all, rejecting Jesus Christ Who died vicariously for their sins and rose from the dead for their justification! Amen.
Posted by Max Solbrekken at 5:34 PM