DISCRIMINATION AGAINST CHRISTIAN
BAND IN TORONTO, CANADA:
Is this Just the Beginning of what Christians can expect
following the Liberal  Victory Sweep? 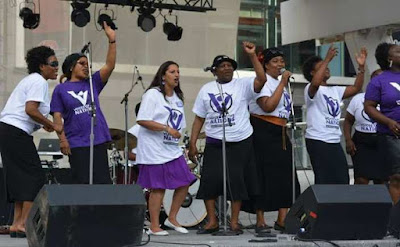 Toronto bans music festival from city square over Christian songs               TORONTO, October  29, 2015 (LifeSiteNews) -- The City of Toronto is refusing  to grant a Christian group a permit to use a prominent downtown square for its  annual musical festival next year, because the city has decided that singing the  name of Jesus in the public venue contravenes city policy against  “proselytizing.” Voices of the Nations (VON) has been using  city property since 2006 for an annual “multi denominational” event in which it celebrates Christianity through live music and dance. It has been using the Yonge-Dundas Square without issue for the past five years. This year’s August event attracted 19 different performance acts, including children’s choirs and popular Christian bands, where well-known ‘praise-and-worship’ songs such as “Days Of Elijah” are performed. When VON’s Events Coordinator Leye Oyelani contacted the Square’s Manager of Events Natalie Belman last week by phone to apply for next year’s permit, he was told that a permit would not be issued and to look for a venue elsewhere. “If you’re praising  Jesus, ‘praise the Lord,’ and ‘there’s no God like Jehovah,’ that type of thing, that’s proselytizing,” she said. ‘Blatant  discrimination’. Rev. David Lynn,  street preacher and founder of Christian Positive Space & Stop  Bullying Christians Now, called the refusal to grant the permit “blatant  discrimination” against Christians.


“How’s a Christian  at a Christian Event not to say the name of Jesus in their Songs?” he asked in an interview with LifeSiteNews.
“This City of Toronto verdict is telling the Christian Community that we are not allowed to be ourselves on Toronto property. This is awful,” he said.  Paresh views the permit refusal as a direct assault on God and has vowed to fight the verdict. “The city official  is not going up against me or my organization, but against the most high God.  She's basically saying, ‘Sorry, but you can't have the name of Jesus being  spoken from the stage on Dundas Square. When they go up against the most high  God, in my opinion, I have to fight for the name of Jesus. Whatever happens, I will fight for the name of Jesus.”
Ben Robinson,  director of the Toronto Christian Business Directory and a  sponsor of the VON event, called it “sad” to see public officials
“discriminating against a Christian group for singing songs in public about  Jesus. It’s almost as if  we are nearing the last days where the Bible tells us that Christians will be  persecuted for their faith. This is only the tip of the iceberg and I believe  that things will only get worse, but we know that Jesus has already won the  war,” he told LifeSiteNews.
Posted by Max Solbrekken at 2:19 PM