The
Transforming Power
of the
BIBLE!
by Rev. Max Solbrekken, D.D.

HERE IS A SHORT COMPILATION OF WHAT OTHER US PRESIDENTS SAID ABOUT THE BIBLE:
George Washington:  “It is impossible rightly to govern the world without God and the Bible.”
Thomas Jefferson:  “I always said, I always will say, that the studious perusal of the Sacred Volume will make better citizens, better fathers, and better husbands.”
John Quincy Adams:  “In what light soever we regard the Bible, whether with reference to revelation, to history, or to morality, it is an invaluable and inexhaustible mine of knowledge and virtue.”
Andrew Jackson:  “The Bible is the rock on which our republic rests.”
Ulysses Simpson Grant:  “Hold fast to the Bible as the sheet anchor of your liberties:  write its precepts in your hearts, and practice them in your lives.  To the influence of this Book we are indebted for all the progress made in true civilization, and to this we must look as our guide in the future.”
William McKinley:  “The more profoundly we study this wonderful Book, the better citizens we will become, and the higher will be our destiny as a nation.”
Theodore Roosevelt:  “I plead for a closer and wider and deeper study of the Bible, so that our people may be in fact as well as in theory “doers of the Word and not hearers only”.”
Woodrow Wilson:  “When you have read the Bible, you will know it is the WORD OF GOD, because you will have found it the key to your own heart, your own happiness, and your own duty.”
Warren Harding:  “I have always believed in the inspiration of the Holy Scriptures, whereby they have become the expression to man of the Word and Will of God.”
Calvin Coolidge:  “The foundation of society and of our government rests so much on the teachings of the Bible, that it would be difficult to support them if faith in these teachings should cease to be practically universal in our country.”
Herbert Hoover:  “We are indebted to the Book of books for our national ideals and institutions.  Their preservation rests in adhering to its principles.”
Harry S. Truman:  “The Bible is the moral code of our nation and of civilization.”
Dwight D. Eisenhower:  “In the highest sense the Bible is to us the unique repository of eternal spiritual truths.  In the most tangible sense, it is the ultimate and indispensable source of inspiration for America’s life in freedom.”
In 1831, Alexis de Tocqueville, after visiting the USA, made this outstanding statement:
“I sought for the greatness and genius of America in her commodious harbours and her ample rivers, and it was not there:  in her rich mines and her vast world commerce, and it was not there.  Not until I went into the churches of America, and heard her pulpits aflame with righteousness, did I understand the secret of her genius and power.”

POOR WOMAN CONFRONTED BY AN ATHEIST!
The great English preacher, Spurgeon, told the story of a poor woman who was confronted by an agnostic.
"What are you reading?"  "I am reading the Word of God", she answered.  "Who told you that?"  "He told me so Himself", she countered.  "Told you so?  Why, how can you prove that?"
Looking skyward, the poor woman said, "Can you prove to me that there is a sun up in the sky"?  "Why of course; the best proof is that it warms me and I can see its light."
"That's it", she shouted.  "The best proof that this book is the Word of God is that it warms me and lights my soul".

THE CONVERSION OF QUEEN VICTORIA!
Here is the glorious testimony of how England’s Queen Victoria was born again!
A beautiful incident in the experience of Queen Victoria is worth remembering.  It has been published and is unquestionably authentic.  The Queen had attended a service in St. Paul’s Cathedral and had listened to a sermon that interested her greatly; then she asked her Chaplain, “Can one be absolutely sure in this life of eternal safety?”  His answer was, “I know of no way that one could be absolutely sure.”
How sad!
This was published in the Court News and fell under the eye of a humble minister of the Gospel John Townsend, an intimate friend of George Mueller, whose life of faith led to the founding of his well-known orphanages.  This John Townsend was the father of the famous “Sister Abigail”, another Christian of extraordinary faith and service.
After reading of Queen Victoria’s question and the answer she received, John Townsend thought and prayed much about the matter, then sent the following note to the Queen:
TOWNSEND’S LETTER TO THE QUEEN!
To her gracious Majesty, our beloved Queen Victoria, from one of her most humble subjects;
With trembling hands, but heartfilled love, and because I know that we can be absolutely sure now of our eternal life in the Home that Jesus went to prepare, may I ask your Most Gracious Majesty to read the following passages of Scripture - John 3:16; John 5:24; Romans 10:9-10?
These passages prove there is full assurance of salvation by faith in our Lord Jesus Christ for those who believe and accept His finished work.
I sign myself, your servant for Jesus’ Sake, John Townsend

John Townsend was not alone in praying about his letter to the Queen.  He took others into his confidence, and much prayer from many hearts went up to God.
In about a fortnight he received a modest-looking envelope containing the following letter.

To John Townsend;
“Your letter of recent date received and in reply would state that I have carefully and prayerfully read the portions of Scripture referred to.  I believe in the finished work of Christ for me, and trust by God’s grace to meet you in the Home of which He said, ‘I go to prepare a place for you’.”
(Signed) Victoria Guelph.

Please Note:   The above testimony was excerpted from the tract, ‘Can We Be Sure?’ by Hull Publishing Co. Ltd., Winnipeg, Canada.

The people of Taiwan were spared the tyranny of the ‘Butcher from Bejing’, Mao Zedong who murdered and killed his opponents by the millions.  They were spared the inhuman agonizing deaths of between 40 and 80 million whom Mao - the corrupt, unconscionable and filthy emissary of Satan - destroyed through a mass famine, while exporting grain to prove to the world how great his lying ‘cultural revolution’ really was.
Yes, thank God that the people of Taiwan escaped the kangaroo trials, murders by the inquisitional Red Guards because of that godly man President Chaing Kai-Shek and his belief in Jesus Christ as his personal Saviour!
Editor’s Note:  Write for the free article, ‘Canada’s Shame: Trudeau

TESTIMONY OF TAIWAN’S PRESIDENT CHIANG-KI-SHEk PERSONAL FAITH, TO HIS PEOPLE
“How I wish that all the people would read the Bible, worship and believe in the one and only true God!  The Bible which is God’s Living, inspired and true Word teaches us about the triune God:  Father, Son and Holy Spirit.  The Bible also declares that we can attain righteousness by our faith in His Son Jesus Christ, Who gave Himself through His death on the cross, and shed His blood as an offering for sin.  God’s righteousness by faith in Jesus Christ exalts a nation.  That has been proven historically. Christ is Freedom’s Rock!  His love covers a multitude of sins.  Everyone who believes on Him shall receive eternal life!” 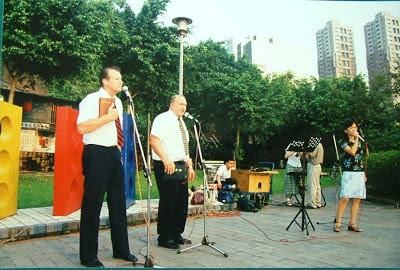 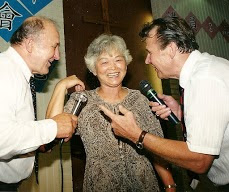 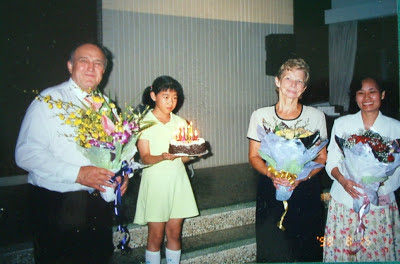 Dr. Nick and Mrs. Krushnitsky give a special
honour and tribute to Donna  Solbrekken at
the 1999 Bible Conference in Taipai, Taiwan.

Posted by Max Solbrekken at 9:10 PM